Here are some badass guys who gave an amazing 10 Badass Keneki Ken Cosplay to us.All the credits goes to these cosplayers who out did this Cosplay in an amazing and daaaam wonderful way.

This article may contain some spoilers for those who have not read manga “Tokyo Ghoul:Re”.

Keneki Ken was a student studying Japanese Literature at Kamii University and living a normal life.However, everything soon changed after he had Rize Kamishiro’s and kakuhou transplanted into him and became a one-eyed ghoul. After joining Anteiku as part-time waiter, he learned how to live as a ghoul and became known as Eyepatch.

After being captured by Aogiri Tree, he underwent a drastic personality change, forming a team with the goal of protecting the ones precious to him and exterminating people who threatened the place he belonged to. Because of his Kakuja’s distinct appearance, the CCG gave him the nickname Centipede.

He is currently living under the identity of Haise Sasaki , an Associate Special Class Ghoul Investigator that formerly served as the mentor of the CCG’s Quinx Squad. His memories were initially lost to him, but regained during the Tsukiyama Extermination Operation. Six months after the operation, ghouls have come to know him by the moniker of Black Reaper.

Keneki’s ghoul mask resembles a leather gimp mask with an eye patch. It bears a lipless mouth that shows large, gnashing teeth, much like restrained asylum monster. The bolts sticking out of his neck and the fact that he is an artificial ghoul invoke a Frankenstein-like theme.

After the Tsukiyama Family Extermination Operation, his appearance has changed drastically again. His hair has completely reverted to its original black color, and he started wearing his glasses at all times. He wears a black version of the Arima Squad uniform, pairing a black dress shirt with black slacks and a long, black trench coat. In contrast, he wears a pair of red gloves that disguise his right hand covered in reptile-like scales. Kaneki was a shy and reserved person, with Hide being his only close friend. He usually spent most of his time reading books, mostly novels. He is extremely gentle and appears to be optimistic most of the time. Influenced by his mother and a true testament of modesty, he willingly takes blame and punishment from others so that he can be someone who doesn’t hurt people, but rather absorb the torment. However, this lack of assertiveness normally gets him bullied and taken advantage of.

After he was turned into a half-ghoul, he clung onto his human side. To keep living in the human world, he began to work at Anteiku and established relationships with the ghouls there. He started to develop an interest in becoming stronger and began reading martial art books so that he could protect the people close to him. However, he was still troubled with the fact that he was a half-ghoul and wanted to search for a place where he could belong. As much as he treasured his life, if people close to him were threatened, he wouldn’t hesitate to put his life on the line. When Keneki was a child he liked eating the burgers that his mother made when she was still alive. He lost his father when he was four years old. He barely remembered his face and was awfully curious as to what sort of person he was. He knew that his father was an avid reader and had loads of books. Kaneki followed the sentences in the books his father had been reading, saying he felt like he was having a conversation with his father which calmed him down. This developed his hobby for reading and interest in literature.

One day, the manager asked Kaneki to obtain “food supplies” with Yomo, i.e., they looked for humans who committed suicide. Afterwards, they picked Ryouko up, who was warned by Yomo that the investigators came because of her and that she should move more prudently for Hinami’s sake. Ryouko agreed and said she would stop relying on her dead husband so that Hinami could depend on her. Kaneki then thought that a parent’s concern for their child was strong in any world. 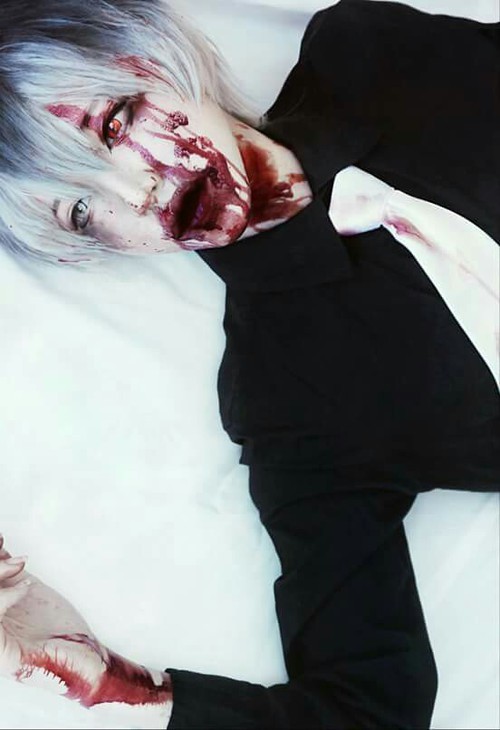